The “PhysPhil” conferences on physics and philosophy

In September 2012 and May 2014, the Physics and Philosophy Society of St Andrews, chaired by Dr William Simpson, were pleased to host the first two international Philosophy and Physics conferences at the University of St Andrews, with the support of Dr Andrew Pinsent and the Ian Ramsey Centre.

The “PhysPhil” conferences in St Andrews:
a selection of talks on physics and philosophy

In September 2012 and May 2014, the Physics and Philosophy Society of St Andrews, chaired by Dr William Simpson, were pleased to host the first two international Philosophy and Physics conferences at the University of St Andrews, with the support of Dr Andrew Pinsent and the Ian Ramsey Centre. The conferences were free and open to the public, and the days were divided into talks and discussions on the subject of space and time, quantum mechanics, and the relationship between physics and metaphysics. 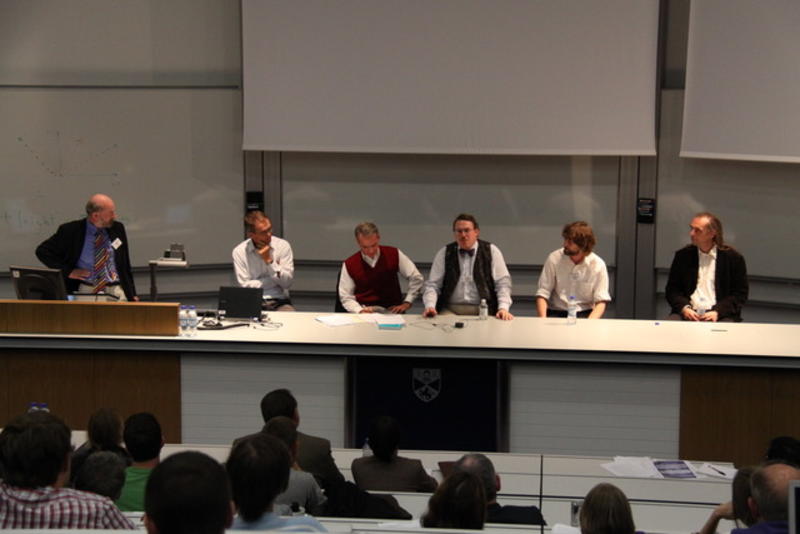 In his introduction to the series, Dr Simpson pitches a challenge both to philosophers and physicists: on the one hand, the microphysicalism to which many philosophers cleave must be radically reimagined in the light of quantum mechanics; on the other hand, we cannot interpret the claims of physical theories without doing philosophy, and should learn to do it well.

Prof Tallis argues that there is philosophical work to be done in connecting the ‘scientific image’ of the world described by physics, with the ‘manifest image’ upon which scientists depend for conducting their experiments. The philosopher seeks to know how everything ‘hangs together’ (as Sellars put it), and this requires us to engage with both philosophy and physics.

Editor’s choice
We have selected some of the highlights of these two conferences that are likely to be of most interest to students and researchers in the field of science and theology.

Prof Halvorson offers a tutorial explaining the basics of quantum mechanics for layman, including concept of entangled quantum superpositions. He argues that ‘ontological naturalism’ has to modify standard quantum mechanics in drastic ways, but that a ‘dualistic science’ can accept it.

Dr Hooley discusses a tension between special relativity, which takes on board the constancy of the speed of light, and quantum mechanics, which describes phenomena like entanglement. For two ‘space-like separated’ events, in relativity theory, there is no fact about which event happened first, but when someone measures the entangled state of two space-like separated particles, in quantum theory, there is a fact about who collapsed the wave function.

Dr Craig argues for the temporality of God, in which God is in time and knows tensed facts, and seeks to reconcile these claims with relativity theory by defending a Lorentzian interpretation, according to which absolute simultaneity and length exist even if we are unable to measure them.

Prof Ladyman puts forward a view of naturalised metaphysics as the task of fitting the sciences together, in which the scientific image is our guide to metaphysics. He claims that theoretical and ontological reductionism are false, but that the sciences are nonetheless unified. Philosophers should rethink fundamental reality in terms of ‘ontic structure’ rather than ‘things’.

Prof Tallis argues that the world of mathematical physics is a world without tensed time because it is a world that abstracts from qualities, but that it does not follow that what is left behind in this abstraction is either less real or does not exist.